Ever thought of enjoying comforts like individual LCD screens, cuisine options by celebrity chefs, tea/coffee vending machines, on-board a normal train in India? Come June, and all this is going to become a reality. Indian Railways is all set launch, the Tejas Express, a new premium train service on the Mumbai – Goa Route. The train is going to have executive class as well as chair cars with 22 new added features including better aesthetics, smoke and fire detectors, suppression systems etc. 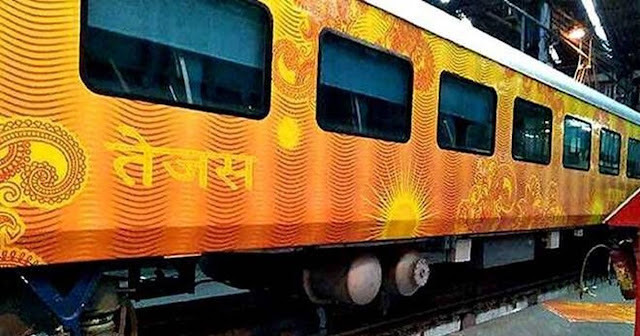 The 20 coaches of Tejas Express are going to have automatic doors and secured gangways. This feature was never installed in any train of the Indian Railways. In the present, such automatic doors are found only in metro trains. Similarly, corridors between the coaches and the gangways are not closed from the sides.

The authorities had said that a train like Tejas express will be made within the promised budget. After the Mumbai-Goa run in June, a similar train will then ply on the Delhi-Chandigarh route. A senior Railway officer informed that as this is going to be a new premium class train, Tejas has modern comfort like snack tables, tea and coffee vending machines, magazines and so on. Special features in the toilets are sensorised taps, hand driers, and bio-vacuum toilets in water level indicators.

Another highlights of Tejas Express are toilet engagement boards, Wi-Fi facility and best of meals with cuisine designed by celebrity chefs. The color scheme of the train’s exterior as well as the interiors is going to be the same. The official further added that the LCD screens are especially for the entertainment process but will also be used for broadcasting safety instructions and passenger-related information.

Catering service on-board the train is going to be a part of fare of Tejas, similarly like Shatabdi and Rajdhani trains. The coaches are also going to have electronic passenger reservation charts, integrated braille displays, and digital destination boards. The government’s main focus is offer comfortable rail journeys to passengers during inter-city journeys.